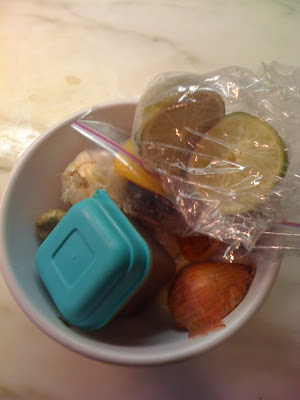 Despite looking like a bowl of table scraps for the dog, these are fresh seasonings.
After hearing “this tastes like cereal before anything good has been added to it,” I searched for ways to punch up flavor without having to douse everything in ketchup, syrup, and chocolate sprinkles. I’ll admit that like Grandma Leona, I save everything that has cost me time shopping and chopping, especially those things that give me taste options. In this bowl: limes, ginger, the tiniest capsule of Thai chili paste from a carryout meal, garlic, a shallot, the blue plastic contains leftover mole (Mexican sauce not the furry, blind rodent) sauce, a two-inch piece of lemongrass, a snack bag of olives from last week’s Greek food (mezze) platter. Oh God, I’m a candidate for the “Hoarders” reality show. I’ve been known to take an extra container of cilantro from Baja Fresh for future meals – I figure it’s their loss leader to my business. The bowl goes in the produce drawer of the refrigerator until something green needs a lift.

My theory is that the higher the nutritional value of the food, the more leeway I have in seasonings. For instance, don’t mind adding a tinge of sugar or agave syrup to salad dressing because I know it helps encourage salad eating. But, French Toast might only get cinnamon (except for when it gets maple syrup) – I can’t fight the French. The best thing about the go-to bowl is that it makes my meal prep fast and nimble. I don’t have to run out to the store for the missing ingredient and my food doesn’t have to taste the flavor-void cereal.